The best creative writing process is yours. Other people are not the "real writers." If you only piece together a story by luck, that is your process, and it is as valid as any other.

When I finished my first novel, I felt such overwhelming relief that I cried, amazed that the book finally had a beginning, a middle, and an ending. Beginnings were, and are, no problem for me. I used to start a story twenty different ways, and I'd still get lost toward the middle. I won't even discuss endings , except to say that a good ending is no easy feat and still gives me grief.

Combine the difficulty of writing a complete story with the fact that many people can dash off a rough draft of a novel in a few weeks or months, and you may understandably doubt your process.

But I learned that those quick drafts are often no more ready for publication than my partial ones. 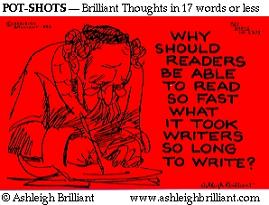 Word wizards get a first draft out quickly, but they agonize  over and avoid the necessary revisions. The fiddlers agonize over the first draft but can polish and buff a text until it is a thing of beauty.

I've also heard of a few writers who enjoy the whole writing process with no agonizing whatsoever.

Most of them bring to mind the words of Samuel Johnson: What is written without effort is in general read without pleasure. The rest cause me to feel as I do upon hearing that someone else won the $20 million lottery.

The writing process is personal. Real writers write regularly and don't give up until they succeed.

It does no good to worry about the progress of others. We all proceed at our own pace, and if someone else writes better, she may be more talented, or she may only have learned more or practiced more. Either way, its her writing process.

Yours is what you make it, tortuous or not.

I've made a decision not to agonize anymore. Every story,develops from scenes placed in order according to cause and effect.

When you write enough strong scenes and place them in the best possible order, a book is born.

My process is to focus on creating one scene at a time, without worrying about anything but that one scene, which makes writing more enjoyable, and often a pleasure, as it is difficult to feel overwhelmed by a single scene.

Good writing will always require more work, discipline, and perseverance than you like, but it needn't be an act of forbearance.

Plan as best you can, but have faith in your subconscious ability to create order out of chaos, and something out of nothing.

Read, observe, think, write, revise. Focus on the scene at hand, and a story will emerge.