How to Use Literary Foreshadowing 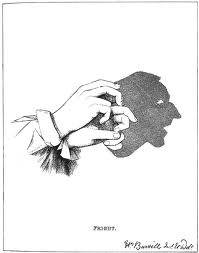 Foreshadowing is a literary device that uses symbolism, overt suggestion, prediction, and other means to provide hints about what will happen later in the plot. Occasionally the main purpose of an entire scene is to foreshadow an important future event.

In Chapter One of The Namesake, by Jhumpa Lahiri, the first scene introduces readers to Ashima, as she is about to give birth. In the second scene we see her husband Ashoke reading in the waiting room of the hospital, awaiting the arrival of their firstborn (p. 18). In this scene, the narrator recounts how Ashoke's love of reading saved his life.

Through a mixture of narrative summary and active flashback, readers learn of the train wreck that nearly ended Ashoke's life on October 20, 1961. Flung far from the train, rescue workers only discovered Ashoke because he still clutched a page from the book he was reading at the time of the derailment—The Overcoat, by Nikolai Gogol. This scene is crucial to the story because it provides the background that explains why the couple names their son Gogol. It also foreshadows and prepares readers for the death of Ashoke later in the novel.

Many critics have discussed how the overriding symbol of The Namesake is that of life's journey, with all its twists and turns, stops and starts, arrivals and departures. A careful examination of Lahiri's novel will show that most of the many literal journeys characters take in the story occur by rail.

Gogol takes the train home to visit his parents while he attends university, and he meets Ruth, one of his American girlfriends, on the train. On one ride home, the train is delayed because someone committed suicide on the tracks. This event alludes to the death of Tolstoy's Anna Karenina when she throws herself in the path of a train, and again foreshadows the coming death of Ashoke.

In her book Showing & Telling, Laurie Alberts provides one of the best examples of symbolic foreshadowing I've seen, using Jo Ann Beard's personal essay, "The Fourth State of Matter," about a shooting at the University of Iowa, where Beard teaches. In an early scene in the essay, Beard writes about having someone come to her home to remove a family of squirrels. As Alberts tells it, "there is a lot of chasing of squirrels and squirrels shrieking when caught."

So while this scene has nothing whatever to do with the shooting, it expertly symbolizes and foreshadows the horrific and frantic events that occur at the university later in the day.

More About Self Publishing