I have included some of my favourite creative writing quotes on this page, numbered for easy reference. I'll add more as I come across them.

Reading through writing quotations has often inspired me to write, even on those days when I think we've reached a literary saturation point, with enough books in stores and libraries to keep all of us reading until the day we die. When I read writing quotations like these I become creative.

Creative writing quotes remind me that writing is about thinking and about sifting through the thoughts of others in search of that elusive something that will trigger our own ability to articulate the truth as we see and imagine it. Writing forces me to clarify my thoughts, and that alone provides reason enough to sit at the computer.

So...if you are here as a reader, welcome! But if you are a writer, particularly one who needs a reason to get excited about writing again, I hope these creative writing quotes will inspire you as they inspire me! 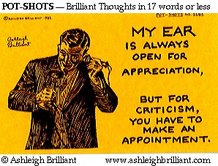