Both a Protagonist and an Antagonist

An early mistake of new writers is to shy away from problems by omitting the antagonist. A story without an antagonist may succeed through conflicting needs, or through external events such as injury or bad weather. However, the story will be easier to write and have better tension if you pit a clear antagonist against the protagonist. To hold reader interest, engage the reader's emotions. Generate like or dislike for a character. An antagonist creates problems for the protagonist and so incites reader emotion. Resolving the problems created by the antagonist involves the main character in purposeful action and allows readers to learn more about the character through the choices he makes.

The first example tells readers about Preston, while the second allows them to see him for themselves. The second example provides more of an emotional experience as the imagination creates a sharper image of someone possibly likeable, one that can be made clearer still through appearance, speech, thoughts, action, and the reactions of others. 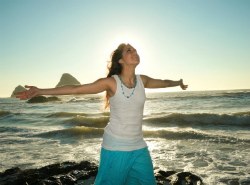 I sometimes check catalogues for inspiration when I'm "peopling" my fiction. I choose a model and write a paragraph about him or her. I keep these sketches in a notebook, and flip through them later in search of personality traits that have found their way into the writing.

When you look at the photo to the left, you can identify something more about the woman than the colour of her hair and the clothes she wears. Something joyful and carefree comes through in her pose. Aim to have your descriptions also convey the character's nature.

Creating fictional characters requires more than: "She had dark hair and a pale round face broken only by a pointed chin." This provides superficial information about appearance and perhaps ethnicity, but shows nothing of the character's nature--whatever it is that makes her likeable or unlikeable. If a character is to have dark hair, use her hair to suggest something meaningful about her:

Readers now know that the character's hair is dark, but they also know she is not the type to spend time artfully arranging her hair. Based on the conservative clasp, readers might infer that she has a conservative side. The wisps that cannot be contained suggest something else about her, a side that wants to break free.

So avoid the tall blonde entered the room, and strive to impart more important information.

This description of hair suggests confidence, perhaps a desire for power or attention.

Also avoid strings of adjectives: The man in the orange plaid jacket and green tie entered the room, holding a slim leather binder. Instead, split the adjectives into separate sentences, and make them reveal more than simple clothing and accessory choice. You might try something like this:

When you're stuck, the Internet provides many unique and useful tools for creating better characters. See THIS PAGE for sites that provide character trait charts, that describe psychological disorders, medical illnesses, and more. The idea is not to make your character a case study, but to give him or her traits that will cause readers to remember and care about the character.