It begins with a strange tightness in her chest, followed by a vision. A boy she doesnt recognize. A man falling through ice. Images of someone who has already passed. And finally the serene face of Honora, her deceased sister. 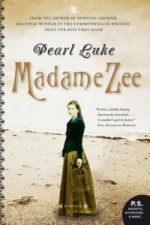 From the earliest moments of her childhood, Mabel Rowbotham, later known as Madame Zee, knows that she is different. The visions and premonitions that disturb her dreams and haunt her waking hours stay with her long after she emigrates from her English home to the Canadian Prairies.

Although she desperately wants to understand these powerful episodes, Mabel tries to hide her gift behind a normal life, a normal job and a normal marriage.

But Mabel is not destined to be normal. Her desire to understand herself and her place in the world leads her into the arms of the Brother, XII, founder of a utopian Spiritualist colony on the eastern shores of Vancouver Island. Here Mabel fully transforms into the complicated and enigmatic figure Madame Zee.

Amidst upheaval and strife, she ultimately finds a sense of self and an explanation for the mysterious knowledge that has shaped her life.

Pearl Luke, prize-winning author of Burning Ground, has drawn on the extraordinary true story of Canada's most infamous cult leader and his mistress to create a haunting and provocative novel that confronts one woman's desire to truly know herself. Dark and searing, magical and evocative, Madame Zee is a brilliantly imagined portrait of a life that suggests another side to a woman whom history has repeatedly maligned.

A writer of great poetic sensibilities balanced with a healthy understanding of how to build a good story.  Globe & Mail

A moody, sensual novel about an enigmatic and difficult woman. A fascinating read.  Edmonton Journal

A fascinating fictional biography of a very unusual woman, a stylish novel that you won't forget - at least not until someone turns Madame Zee into the movie it deserves.  Sun Times

A definite, and truly fine, must read.  Victoria Times Colonist

The sense of place that Luke conjures, is magical.A resting place worthy of another dark angel fallen from history into art.  Calgary Herald

Read an EXCERPT from Madame Zee