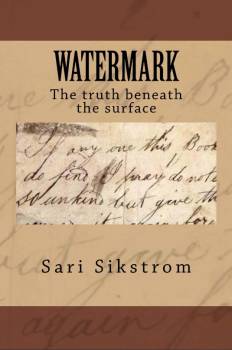 Watermark has one of the most interesting protagonists I have ever encountered. Dr. Vela Ostofvold is a "forensic librarian," an occupation that until now existed solely in Sari Sikstrom's imagination. As she soon allows us to learn, the protagonist's job is to analyze books as physical rather than intellectual objects. Through the study of "ephemera, inscriptions and notations," the character tells us, "a secondary story beyond print accumulates." That the main character is a Sherlock Holmes of the book world fascinates me, as does the idea that books can reveal so much more than the story contained in their pages.

[Watermark has one of the Most Interesting Protagonists…]

As the novel opens, readers meet the main character as she introduces herself at a symposium for forensic scientists:

"Hello, I am Vela Ostofvold, and I am a Forensic Librarian." I had a captive audience and I {needed to} make the most of it.

I smiled back at the group growing around me. "Does anyone have a well read book with them?" I waited while onlookers opened zippers on knapsacks and tugged at Velcro fasteners. I chose the volume with the most obvious wear.

I balanced the spine on my palm. "Where has this book been? The dust jacket is missing, and the cover is faded, think of a possible environment."

Several voices responded. "Outside in the sun."

On a table by a window," said another.

"Good." I ran my finger along the edge of the book. "I see traces of gilding, not much left, perhaps eroded by moisture." I flipped the pages. "The readers left greasy fingerprints. This suggests a casual environment where eating and reading are acceptable."

I turned to the title page. "No inscription or name." I ran my fingers along the margins bordering the text, stopping on several short strokes made with a ballpoint pen. "You might look at a series of lines as a careless doodle, or the beginning of a musical score. A stray slip of paper hidden in a book may hold a combination to a safe which may destroy one fortune and build another."

I looked up and closed the book. "This was not a possession. I suggest it is a communal book from a seaside bed and breakfast."

The person who supplied the volume confirmed, "I picked it up in a guest house in Spain." He stepped forward to retrieve the book.

What an original and memorable character! The sort that no editor forgets, and that every writer should aim to create. There is a place in literature for characters of every occupation, and how my mind raced with excitement when I discovered such freshness of imagination.

Most of the book is written in prose as concise and lively as the passage above, and the diction is exquisitely original, with many impressive lines and descriptions, such as when Vela examines another book and says, "it is as if a dragonfly dipped its tail in ink and flew over the page," or when the gladioli plants in the hotel landscape create a "phantasmal army with their swords raised." On every page the story provides proof that Sikstrom will become an author of acclaim.

I do find that Watermark feels somewhat rushed, perhaps self-published before it reached its full potential. I am left wondering just how much this book might have revealed if more time had been spent developing all the wonderful ideas and plot points.

Still, the book is a treasure trove for those who read more for language and originality than for plot development.

As Pearl has said, Sikstrom's language is wonderful. While some aspects of the novel might have been developed further, she reveals her story in gentle, concise manner that moves the reader from place to place quickly. I can't recall a book with such a unique and interesting set of characters. Once started, I couldn't stop reading. In the future, I hope we will hear more of Vela, Amelia, Franco, and will get to meet Olivia.