Vanessa and her Sister by Priya Parmar 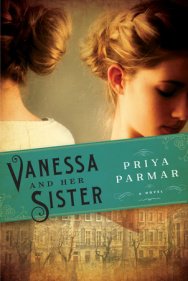 Vanessa and Her Sister is a riveting novel that spans a seven-year period in the lives of Virginia Woolf and her elder sister. This is a novel so lush and masterful it stands out as any masterpiece stands out, as a rich and unforgettable sensual and intellectual experience.

The story is sandwiched between two letters that act as a prologue and an epilogue, written three days apart in December 1912. In the opening letter, Virginia Woolf thanks Vanessa for a small portrait titled Virginia Woolf in a Deckchair and asks her forgiveness. In the closing letter, Vanessa expresses satisfaction that Virginia appreciates the portrait, and responds to her call for forgiveness. Between these two letters, impassioned diary entries by Vanessa provide the details of Virginia’s offense. They also provide a fascinating glimpse into the daily lives of the women, both privately, as siblings, and socially, as members of the London Bloomsbury Set.

Virginia deals in words. When “serious, literate men” frequent their home, she charms them “with her high wire acrobatics of witty, well-turned phrases, cleverly layered and underscored by her perceptive, ruthlessly subtle mind.”

Enigmatic Vanessa thinks as a visual artist—“...in mass. In colour and shape and light and volume and texture.” Her mind asks, “What is the colour of good? What size? What light?”

Conversation during the group’s Thursday “at home” evenings is as smart and witty as one might expect, but also personal, allowing readers to feel as if they too have dropped in for an evening worth writing about. Alone, the siblings are sometimes tender and accepting, sometimes not, their discussions and disagreements—“Chewy, swift, loud arguments”—punctuated by comfortable togetherness. “When there was nothing to say,” Vanessa notes, “we made room for silence, like a thick blue wave rolling through the house.”

[Vanessa and her Sister is a Rich and Unforgettable Experience…]

Inserted into the novel like keepsakes pasted amongst Vanessa’s innermost thoughts are notes and telegrams from other members of the Bloomsbury Set. These create dramatic irony and suspense, many of them alluding to events not yet known to Vanessa. Likewise, frequent postcards from biographer and journalist Lytton Strachey implore Leonard Woolf, away in India, to return at once and marry Virginia. These brief notes do as much as Virginia’s behaviour to contribute to the slow, smouldering tension that builds over the course of the narrative. With the marriage between Woolf and Virginia a foregone conclusion, readers anticipate their eventual courtship.

But with so much known and written about Virginia Woolf, the story evades old ground and directs our focus to Virginia’s terror that she will lose Vanessa as she has already lost her parents and another sister. “Virginia lives to be essential,” Vanessa writes. “That is the only way she is comfortable."

A beautiful and poignant novel about love, desire, and talent, Vanessa and Her Sister is ultimately about belonging. The story asks, "What does it mean to belong to a place or country or family?" and then Parmar shows in wise, alluring detail what it means to belong to this one particular family in all its complicated humanity.

Read more about Vanessa and Her Sister on Priya Parmar's WEBSITE