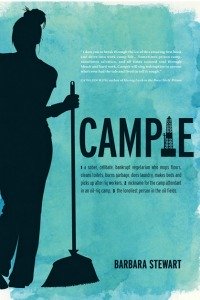 Barbara Stewart, author of Campie, has been sober for 18 years when she finds herself lower than a snake’s belly in all aspects of her life. Stewart struggles every day and uses the wisdom of her sponsor Marguerite for support.

She writes, “Years of seeing other alcoholics relapse has taught me that sobriety was a gift with an unknown expiry date.”

Her struggles are more difficult when she back tracks to scenes from her abusive marriage, the final days of Marguerite’s illness, her bankruptcy, her inappropriate relationships and her estrangement from her two children.  She takes full responsibility for her choices but puzzles over how to make better ones.

For hard cash fast, she goes to work in an Alberta oil field camp. But again she is the lowest of the low - a campie.  Her job is to clean toilets, make beds, do laundry, mop constantly dirty floors and clear away the kitchen trash. Piles of empty snack bags and dozens of empty beer and liquor bottles fill big trash bags that she lugs to the incinerator outside in the bitter minus 30 degree weather.

Stewart works diligently at her hard menial tasks in a smoky haze while her mind clears. She cleans up her attitude, makes strides towards being a better person, washes away the hurts of the past, throws away bits of trashy thinking and makes some rather astute and poetic observations.

Stewart’s writing skills create surprising phrases about the most mundane things.  My favourite is “Duffel bags were stacked like an inukshuk at the kitchen door.”

Both her work as a campie and her inner work are exhausting and never ending. Stewart comes to realize how deep her grief is over Marguerite, her sponsor and friend. With shocking honesty she takes the reader through the minutiae of her day and punctuates it with flashbacks that explain her current destitution, without sugar-coating her actions or insights. When the only other female in camp comes to her room looking for her, Stewart thinks, “It’s nice to feel cared about – but why did they care?”

In addition to her inner demons, Stewart contends with the camp culture, the petty politics of the others living in close quarters, their suspicions of her behaviour, her aversion to men, the effects on everyone of being trapped by the weather and treacherous roads in an isolated area, and most unsettling, the inconsistent information from the cook who smokes weed. She is offered better jobs that might oust others into the cold wilderness. She wrestles with the ethics -  or lack of -  to get three times as much money.

Wisely, Stewart changed the names of her co-workers in the camp.

This book will inspire not only those affected by alcoholism but anyone who has faced adversity in several shapes and sizes at the same time.

View this book at Amazon.ca